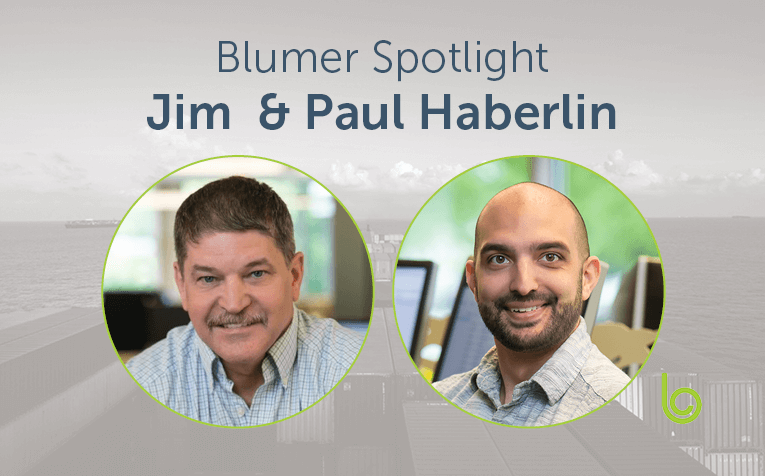 25 years. That’s how long this company has been in existence, and with that time comes family legacies. We have a few families working for Blume Global, but today we want to highlight the Haberlin family. Jim Haberlin, is the longest tenured employee of Blume Global and his son, Paul Haberlin, also works at Blume. Let’s get to know their stories (and what it’s like to work with your dad in the same office)!

Jim, let’s start with you. You’re the longest tenured employee of Blume Global. How did you start your career here back in 1994?

Jim:      I actually started working as a Computer Programmer for the owner of Rez-1 before the company was even formally created. I wrote more than 50% of the coding for our freight management and rail tracking system back then before we evolved to the Blume platform we know today.

And now, what do you do for Blume?

Jim:      I am currently a Senior Software Developer on the M&R (Maintenance & Repair) team building the new application, but I also still help the Asset Management team. We are creating an API for contracts upload so customers can process updates directly from their system to ours rather than signing into the UI and uploading a spreadsheet.

How have you seen the company grow and transform the past 25 years to the Blume Global of today?

Jim:      There have been many changes, especially in the last 5 years. We moved from our old mill building into the current office we are in, which is much more modern. We started with less than 20 people and eventually took over the whole floor in the building and then had some additional space downstairs, so we definitely grew. There was also a lot of software development and a few mergers that expanded our supply chain solution to create the end-to-end visibility and execution platform we have today at Blume Global.

How did Paul become interested in working for Blume?

Jim:      Paul used to work in the hospitality industry and one day at lunch, he told me he wanted to do something customer facing. Coincidentally, there was a job opening for a Customer Service Group (CSG) position at Rez-1 and I told him that that if he was interested, I would get him an interview. Paul eventually got the job on his own merits and has been very successful here. Four years later, here we are today working for the same company!

Paul, what is it like working for the same company as your dad?

Paul:      It has been a very interesting experience. When I was younger, I never thought that I would be working in this industry – let alone with my father. Typically when I see him around the office, we chat a little but our paths don’t cross much for job functions. However, when he was focusing on the Asset Management platform, I would have moments of actually working with him as he resolved service tickets for enhancements, defects, and pointing out the occasional user error.

How does working at a company like Blume differ from the hospitality industry? And what is your role at Blume?

Paul:      My current role is Operations Support Lead and I lead the Asset Management support team, as well as work on helping to implement new programs from a CSG perspective. The biggest difference has to be the hours. In the hotel industry, I worked all shifts: overnight shift (11PM-7AM), weekends, holidays, and plenty of overtime. Now, I have a steady schedule and free weekends. If we are buried in snow, I can work remotely as opposed to being stuck at the hotel for days on end.

What excites both of you about working for Blume Global?

Jim:      The main thing would be the people, many of whom I have worked with for over 10 years, some over 20.  My next favorite would be building new applications.

Paul:      I have to agree with my dad on the people. I have a lot of fun working here in the office with great people all around me! I have even begun training our team in Hong Kong on the asset management platform which has been a totally new experience for me.

What do you guys like to do during your free time?

Paul:      My interests are a bit all over the place. I enjoy watching the Patriots win, especially with my dad. When the weather is nice, I spend time outdoors hiking, going to concerts, and the beach. I recently built my own computer which I continue to tinker with or game on. I also have a comic book collection that has grown in size considerably since I have started working here, and isn’t showing many signs of slowing down.

Thank you, Jim and Paul Haberlin!

As a bonus, here is a caricature of them at one of our work events. 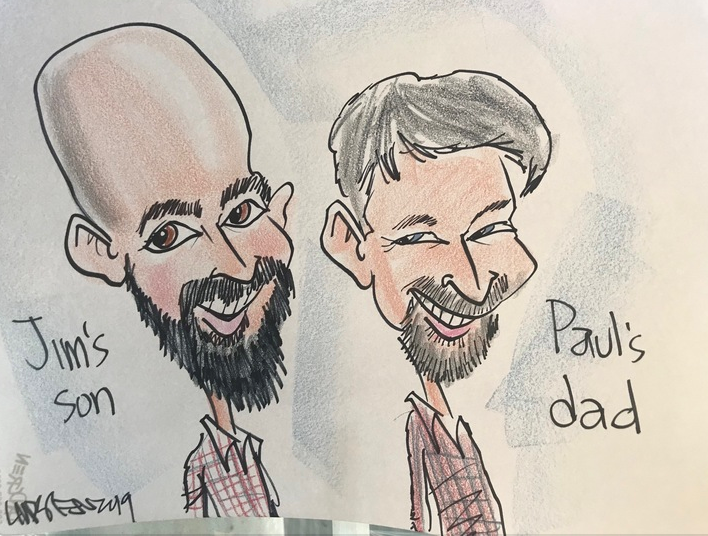 VIEWPOINT: As Reality of Recession Nears, Shippers Look Beyond Visibility to Build Resiliency in their Supply Chains