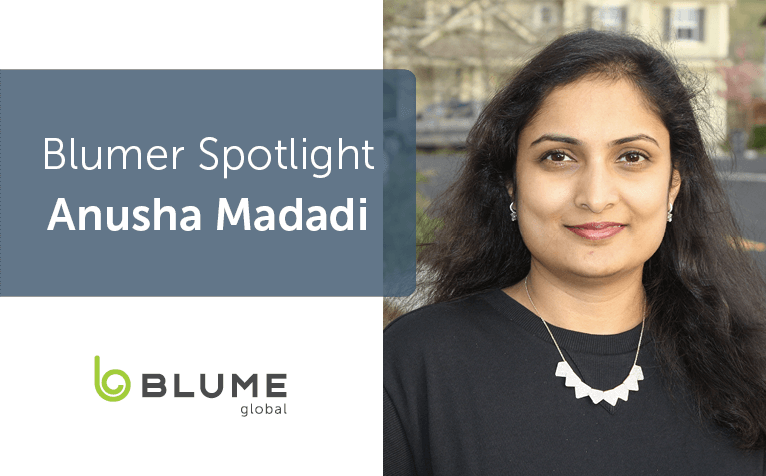 As part of Women’s History Month, we’re highlighting some of the Blume women who are key to our growth and success. In this spotlight, we spoke with Lead User Interface (UI) Developer, Anusha Madadi about her role at Blume and what it’s like to be a woman in tech. Originally from India, Anusha completed a graduate degree in Computer Science from the University of Kentucky.

Hi Anusha! What’s your current role for Blume Global and what are some of your key responsibilities?

Anusha: At Blume, I lead the UI framework development. I make sure our product is intuitive and efficient. On a daily basis I talk to almost all of our UI developers, about forty of them, to make sure they’re all in sync and that our product is consistent. I work primarily with the Universe and Platform teams. My responsibility is more than just one team since I lead all the UI developers; at any given time, I am working across all the teams. I also work closely with the User Experience (UX) team and make sure what they are creating is doable on the UI side.

Wow, that’s so neat that you work with so many different groups of people! What’s it like working across teams?

Anusha: My team is essentially all the UI developers. I really enjoy working with all of them. There is a lot of collaboration and teamwork. A lot of them are junior developers and fresh grads, but we do have more experienced developers.

Sounds like a broad range of team members. How have you helped the more junior developers grow professionally?

Anusha: I’ve encouraged the senior developers to mentor the junior developers and also make myself available to any questions the junior developers might have. I tell them, if they are spending more than a couple hours to solve a problem, just come see me. You can often find at least six or seven people at my desk throughout the day discussing technical issues or even just career advice.

How did you first get interested in computer science?

Anusha: I’ve been interested in mathematics since I was a child. Computers allow you to solve problems and find solutions. I like the challenging, fun and problem-solving nature of computer science.

That’s neat! What led you to want to pursue software engineering as a career?

Anusha: I saw early on in my career how computers make people’s lives easier. In one of my first jobs, I had an opportunity to work with direct end users who entered manual data into spreadsheets and how that took up their entire day. I saw how creating even a simple program that can automate their work excited them, they were so appreciative. With every single automation I did for them, they were ready to put my name on their Christmas cards.

What do you like to do in your spare time?

Anusha: I love spending time with my family, including my two girls. My girls are 8 and 10. I love shopping and baking with them. I also like to paint and sketch.

Did you ever face any obstacles as a woman in tech?

Anusha: Fortunately, I never had any issues with people treating me differently. Yet, I noticed that for every team I was on, I was pretty much the only woman, if not one of two. At the start of my career, I used to feel inferior. Over the years as I gained more experience, I also began to gain more confidence.

Do you have any advice for women seeking to pursue careers in tech?

Anusha: Be confident and don’t underestimate your skills. People say there is a confidence gap between men and women. Men aren’t going to reduce their confidence levels and it’s up to women to bridge that gap. Don’t be scared to say anything when you know you are right.